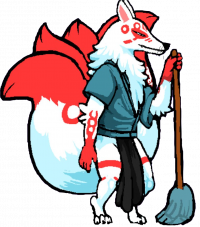 Kyomu is a fox who works as a janitor at Octo's Sushi Place in Lood City. He is found in the back of the restaurant in an “Employee's Only” Area. Of course that won't stop a hero like Joe! Upon entering Kyomu will voice surprise at someone like you being back there with him and ask what are you doing? He then decides that since you are there you can at least keep him company by having sex with him.

Kyomu is a tall and slender individual wearing a steel blue Happi and a black double-sided loincloth. He appears to be holding and using a mop made with fibers similar to the ones that make up his uniform. Kyomu has white fur with intricate Red-Orange markings and patterns all over his pelt, most notably on his face and tails. Kyomu also has more than one tail. It is hard to tell how many but it would seem he has about 4. Each one is very long and fluffy, almost as big as the rest of his body, and like Joe's tail it is a dipstick tail, with half of it being that same red-orange color as the markings on his face and limbs. His muzzle tapers incredibly to a thin point with 4 long whiskers protruding and drooping from the sides. His eyes are very narrow and he often squints with them or has his eyes closed.

While he does have a sex scene, he serves no purpose yet beyond adding the the game's worldbuilding.