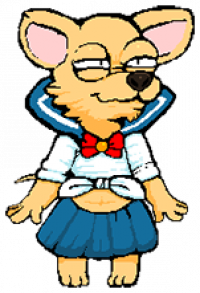 K.Ren is a small chihuahua who seems to be friends with Cas and wears a typical schoolgirl uniform, making him appear to be a cross-dresser. During his sex scene, he sports a red canine penis, effectively making him one of the first characters with a non-humanoid penis.

He apparently works at the “weeby imports electronic store” in Lood City. Whether that is the name of the store or just Ren describing its nature is currently unclear.

He's likely a bit of a pervert, immediately suggesting he and Joe have some fun. Ironically, as mentioned during his conversation with Joe, he's frustrated that the raunchy aliens seem to have no interest in the guy (this could be a tongue-in-cheek joke about how only Joe can be grappled and NPCs just stand there, immune to enemy characters). Despite dressing like an anime schoolgirl, however, Ren is likely just a guy who likes to blow off steam this way, given that he mentions working at an office. The fact that it is an anime schoolgirl uniform may imply that wearing clothes like that are a part of his job.

Whether this character has any purpose outside of a sex scene is unknown.

The K in his name is never actually explained… It might mean Kinky Ren, who knows.