These items are what appear in “Oh So Hero!”. Some are essential to progression and can only be found once, others can appear several times and assist the player during gameplay.

Disclaimer: The information described here are provided by gamers and not a member of the development team, so certain information may be speculative, missing, or even incorrect.

An item without a physical form, the map is received from Ket after talking to him when you start the game and don't skip him. This is often invaluable since it fills in as you progress, with unexplored chunks easily showing you possible secrets or simply areas you haven't reached yet. 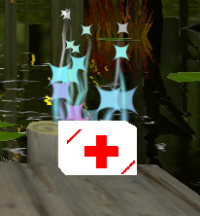 A classic white box with a red cross in the middle. Can be found in boxes.

The Medkit restores 30% of health. 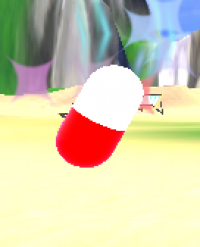 A half red, half white pill. Can be found in boxes and has a 15% chance of dropping on enemies you seduced if you allow their solo animation to finish.

The Chillpill reduces current lust by 10%. 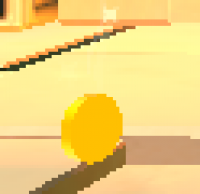 As it says on the tin, it is a coin that is made of gold. Found in crates around various maps.

Unlike other items, the Gold Coin doesn't float. It instead pops out of a crate and lands on the floor while spinning, making them a little hard to see at times. Worse still, it has it's own physics, so can bounce off of springs or even fly out of the crate, potentially making them unreachable. Coins transfer into Zenni, a currency planned for use towards a shop feature in future editions of “Oh So Hero!”.

One coin equates to one Zenni.

Zenni can currently only be spent in Smol Beach on drinks. 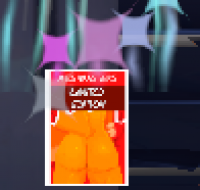 A small book (probably a pornographic manga) with an orange cover and a bare pair of buttocks on the front page.

This enables Joe to use the Butt Stomp ability. 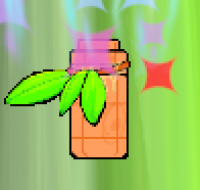 Found in Treewish Forest after getting past the breakable stones with the Butt Stomp ability, it appears to be a small wooden bottle with leaves sticking off it, dripping a clear liquid.

This enables Joe to slide, especially under tight spaces. 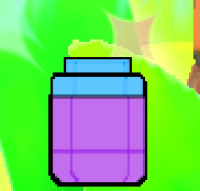 Found in the Treewish forest. It's a small bottle (likely glass) with pinkish-purple paint inside.

This item raises Joe's Charisma up by 10 points, making his seduction attacks more powerful and reduces some enemies into a lusty state with just one seduction. 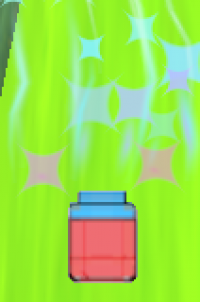 Found in TreeWish Forest, it appears as a small glass bottle with a red fluid inside. This is said to be a placeholder appearance for the time being.

When picked up, this item increases Joe's maximum HP by 50 points. 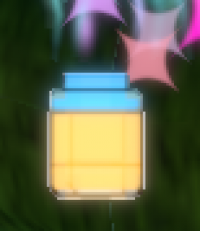 Found in Brask's Jungle, it appears to as a small glass bottle with a yellow fluid inside. This is said to be a placeholder appearance for the time being.

This item increases Joe's SP level by 5, allowing him to save up two additional special attacks. 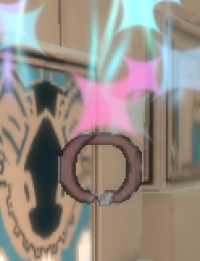 Found in Brask's Jungle, though hidden behind environmental objects. It's a simple leather belt with a buckle, though appears to be too small to fit a waist and seems more for an arm or leg. This is said to be a placeholder design for the time being.

When picked up, it increases strength by 4 and stamina by 4, allowing Joe to do more damage and decreased lust gain from enemy tease attacks.

Spring Water has no physical form, but can be bought on Smol Beach from Korko for 5 Zenni.

When bought, it automatically restores all of Joe's HP and SP.

Fruit Soda has no physical form, but can be bought on Smol Beach from Korko for 10 Zenni.

When bought, it automatically restores all of Joe's HP and SP, but also gives the “Stamina Up Level 1” buff, giving Joe an additional 12 stamina for resisting lust attacks and an extra 16 to lubricity for escaping grapples quicker.