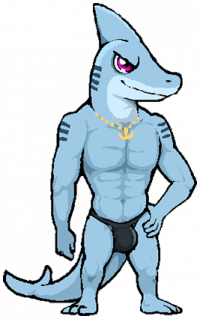 Tiburon is an anthropomorphic shark found at Smol Beach, Tiburon only sports a pendant and tight black speedo. His grey-blue skin is patterned with a few small markings, all stripes, and hides two pink hemi-penises beneath what little he wears.

He stresses out his frustrations over the road between Smol Beach and Sheo Islands Beach being blocked by a van (likely the same one blocking the path to Lood City) as he wants to go to Ali's Surf Shack to pick up supplies.

Whether this character has any purpose outside of a sex scene is unknown.