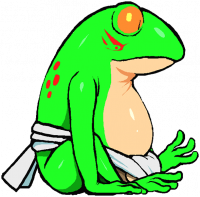 Goliath is a gigantic green treefrog creature who wears a fundoshi and is the fourth enemy type encountered. Out of all the generic enemies in the game, they so far take the most effort to defeat. They are also the only enemies so far with a non-humanoid penis, which are also the largest by far in terms of size (which lean towards the heavier side of “hyper”).

While they lack any real melee attack, they make up for it with a ranged one and a wide grapple (which causes damage if you managed to just get to the edge of its range). They also can't be stun-locked by attacks, making fighting them outside of using seduction incredibly tricky as their health is the largest of the normal enemies by far.

They are, fortunately, very uncommon enemies and are still prone to said seduction, so that or evasion (which can be easily achieved by sliding past them) are the best tactics against them. They also cannot move from their position or turn themselves around unless they attempt to grab you with their tongues.

As of Version 0.14.104, the Goliaths' fireballs now launch higher and can be slid under.

As of Version 0.14.600, their grapple is a fair bit slower than before, making them easier to handle with the hit-and-run tactic.

A sole Goliath appears in the Game Over screen for Brask's Jungle.