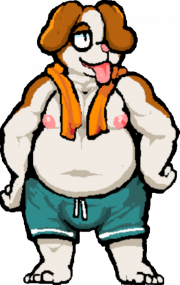 Xiao is an anthropomorphic pug found in Ali's Surf Shop at Sheo Islands Beach. Like Ket and Kaylee, he appears to have known and befriended Joe before the tournament started, immediately recognizing him through his hero costume.

Xiao is an overweight pug with cream fur and pumpkin splotches on his shoulders, eyelids, and floppy ears. He has a pink nose, tongue, and nipples. Speaking of his nipples his pectorals are large and squishy with sensitive nipples, almost like they are actual breasts. He protects his modesty with a Lochivar colored swim trunks. Around his neck is an orange towel.

Xiao appears to be a bit of a pervert. Specifically, he is an exhibitionist and posits to Joe the idea of how hot it would be to have sex in Ali's Store where anyone could walk in and see them except for Ali. Joe can of course agree to take him up on this offer.