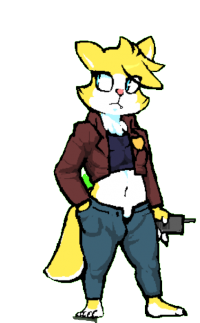 Kaylee is a character who currently resides in Ali's Surf Shop. She is a female feline detective and Joe's close childhood friend. She is planned to give hints and clues to help Joe on his journey and move the game's plot along. She is most likely a placeholder; she has no dialogue or actions with Joe beyond giving him the option to have sex with her when approached.

She is depicted as a yellow domestic cat with a white belly and a long tail. She wears a black crop top, exposing her midriff, and a brown jacket with a police badge on her breast. She wears dark teal, unbuttoned pants, showing black panties.