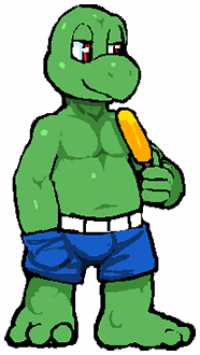 Ket is a Tortavi (a turtle/avian hybrid) who is a lifeguard and a personal friend of Joe who is only ever seen wearing a pair of blue swimming trunks.

He's seen in the first zone sitting around in his chair and casually swinging his feet all throughout, but can later be seen standing around and munching on an orange ice pop. He seems to enjoy exposing himself, never once seen in his shell and has a bit of a foot fetish, but is a polite and happy guy overall.

He acts as the basic tutorial guide at the start of the game, but can later be met and talked to at Southeast Beach due to Sheo Islands Beach having become overrun by aliens.