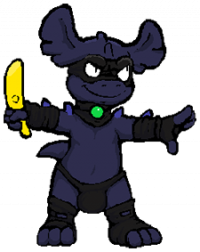 The Daku is one of the first enemy types encountered in the game. Having a baseless species origin outside of being aliens, these little perverts sport all black clothing which include: leg warmers, arm warmers, a thong hiding their humanoid genitals, and some form of neck-wear with a small green ball on the front. They carry around what appear to be sex toys which they will attempt to hit the player with. They have Martinique Blue skin and Gigas Blue spines on their shoulders and upper-arms. They have a stubby tail, a line of spines going across the crown of their head, and relatively big horn-like ears that grow out and curve upwards from the side of their head.

While easy to defeat, they can prove annoying as they have a leaping grapple. Thankfully, they can be punched prior to or during their leap if timed correctly. Their leap, if it misses, also leaves them exposed for a second when they land, though they can still grapple Joe regardless if he simply runs up to them during their landing frames.

As of version 14.500, Dakus have a lust attack. They attack by suddenly growing an erection and making a lewd expression on their face while a pink heart manifests high into the air directly in front of them, dealing a fair amount of lust damage to Joe if he's in midair, slightly above them on an elevated platform, or directly in front of them at a close enough distance. The attack also deals splash damage when the heart hits the ground.

As of version 0.14.600, their splash attack also stuns Joe briefly if it connects. Also as of this update, Dakus are the only enemies that can walk off ledges and platforms to attack Joe, though this is only possible by using their grapple. However, they cannot be knocked off of platforms by Joe's physical attacks like in previous builds.