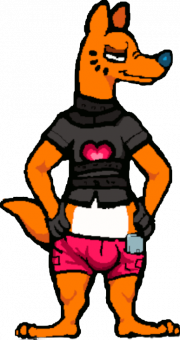 Trace is a Jackal server working at Octo's Sushi Place in Lood City. He notes by Joe's appearance that he appears to be a very capable guy, and that he may have a job for Joe later on. He then states that he is going on break and becomes available for sex.

Trace is shorter than Kyomu and Joe. Most of his body is covered in orange fur except for his belly which is white and his eyelids which are a darker korma. His outfit consists of a black tunic and sash with a bright pink heart in the center, black gloves, and red shorts. He is short and slender with wide hips, his snout curls upwards and ends in a dark blue nose, and of course, he is barefoot.

Trace's dialogue suggests that he may assign Joe some kind of side-quest in a future version of the game. Joe can also have sex with him.

* Trace is the fifth enemy to exclusively top Joe. After Officer Lance, Kyomu, Octo, and Bjorne.