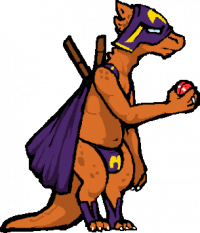 Volte is a Kobold hero found on a floating platform above Blitz's store in Lood City.

Volte's appearance is specifically based on the depiction of Kobolds as they appear in modern fantasy games and franchises such as Dungeons & Dragons. He is a reptilian humanoid with ochre scales, a draconic snout, 3 horns on his head, digitigrade legs, 3 toes, and long prehensile, reptilian tail.

Like Joe, he is competing in the Gerrabacco Tournament by himself, replete with his own personal “Hero Costume”. This costume consists of a violet executioner-style mask, a matching t-string, blanket cape, and shin guards. The mask and bottom wear have bright yellow markings and the cape is secured to his shoulder by golden fasteners. On his back, a pair of russet, wooden handles protrude past his shoulders. It is unknown if these are weapons and if so, what weapons they are. In his hand is a Persian Red Yo-Yo, it is unknown if he uses this as a weapon either. Volte's body shape/type is also very similar to Joe's, albeit, slightly shorter in height and penis length.