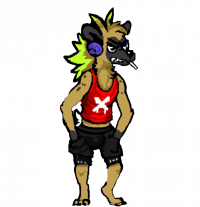 Blitz is a punkish hyena who works at an electronic and music store titled: Super Import Tech and More! in Lood City. Unfortunately, the developers of Oh So Hero! where not able to finish making the store before his debut in game. Blitz claims that there previously was a store and people in it, and displays confusion and upset with the fact that everyone and everything up and vanished except for him.

Blitz is a slightly short anthropomorphic hyena with tussock brown fur all over his body except his face, hands and ears which are more of a dark grey and deep bronze spots on his shoulders. His mane and tail is dyed in an Shocking Green-Yellow. He wears a red tank-top with a white “X” sloppily painted on the front and black bondage shorts with a chord loosely binding his legs together. A pair of royal blue headphones appear to be secured to his head and he appears to be sucking on a purple lollipop.

While he does have a sex scene, he serves no purpose yet beyond making a comment about Lood City's development.