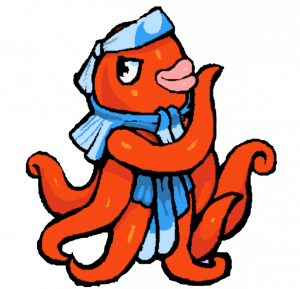 Octo is an East Pacific Red Octopus and the owner/head chef of Octo's Sushi Place in Lood City. Unfortunately, the developers of Oh So Hero! where not able to finish making the Sushi restaurant before his debut in game. Unlike the vast majority of other characters in the game as of late, Octo in no way acknowledges the fact that he is currently in a place holder. Instead, he boasts how he is proficient in using all of his tentacles independently at the same time. Which apparently includes his penis which is just as long as an any of his tentacles.

Octo is shorter than Kyomu and Joe. He has pomegranate skin, thick and blubbery lilac lips, black eyes, and of course 8 tentacles, 2 of which are primarily used for legs. He wears a French pass and Dodger Blue head band which resembles a Hachimaki with a wave pattern on his bulbous head. His torso is covered in some kind of weird sarong like fabric, wrapped in various loops and knots around his tentacles to make them conform to a more humanoid shape. The cloth is the same color as his head band.