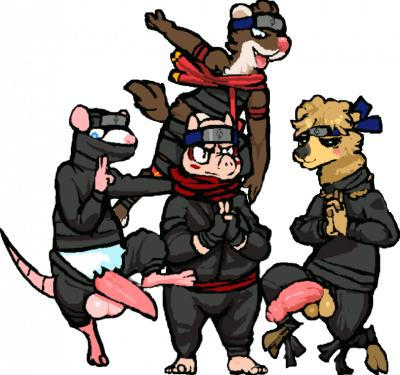 As their name would imply, The Ninja Clan are team of Ninjas. They are the 13th enemy added to the game. They guard important areas in Hiroto Dojo from nosey intruders like Joe.

The Ninja Clan is divided into two groups, the submissive team or the green team and the dominant team or the red team.

The red team consists of an anthropomorphic ferret, weasel, and white rat. The green team consists of a single anthropomorphic swine with red markings around his eyes. All of the ninjas dress as the stereotypical shinobi shōzoku (ninja clad in black garb), each of them wearing black and loose clothing with and a navy blue headband with a metal plate and an engraving that resembles a tree or a leaf.

While exploring Hiroto Dojo, should Joe try to cross over an area covered by a laser trip wire, a projectile will be thrown from offscreen at him, before he is suddenly ambushed by one of the Ninjas groups. The Ninjas will quickly undress and attempt to sexually exhaust Joe. The lasers can be projected horizontally or vertically, and can come in red or green. Tripping the Red Lasers will cause Joe to get group sexed by the dominant team and tripping the Green Lasers will cause Joe to be power bottomed by the submissive team. Additionally, the lasers function similarly to the waterspout arrows in Brask's Jungle and will push Joe away from them, swindling his progress. The dominant team's grapple is harder for Joe to escape, especially since they increase his arousal much faster than the submissive team. Even if you escape, the odds of Joe becoming swooned are probably now dangerously high. By contrast, the submissive team's grapple has a longer animation and deals 50% more damage than the dominant team. But the rate of increase is slower, making it easier to escape. The worst thing to happen is to have your lust greatly increased by the red team and then to get heavily swooned by the green team.

The Ninja Clan primarily guard the vault on the far right side of Hiroto Dojo, preventing anyone from reaching the vault or leaving once the have seen it. They also guard the interior portion of the second floor and completely seal off The Hamster's Office on the third floor.