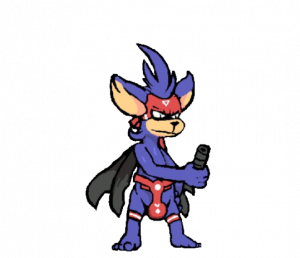 The Tenth enemy added to the game is Bax, although depending on how you play the game he might be the 8th enemy you encounter. Regardless, Bax is an enemy who appears in the Hiroto Dojo as one of the students and/or guardians of the dojo. Design wise, Bax's appearance is very similar to that of the Daku. He is a short anthropomorphic bat with exceptionally large ears, indigo colored fur and a grandis yellow colored muzzle and ears. His outfit consists of a mandy red mask over his eyes with white markings. Additionally, matching striped leg bands and a c-string with additional fabric is folded and covers the abdomen and navel, decorated with white symbols and markings. His testicles are visible when you look at him from behind. He also has 4 black wings growing out of his back. These wings droop and flop around almost like a cape instead of wings, and it is unknown if he Bax can use them to fly. a tall tuft of spikey hair grows from the top of his head. Aside from that he is completely nude.

As of version 0.17.100, Bax's A.I. has been updated, however it may not necessarily be considered complete just yet.

Bax functions primarily as a long range fighter. His weapon of choice is a futuristic energy device, capable of being configured into a variety of weapons made of either soap or solid light. His primary attack is his bubble blaster. Bax fires off two bubbles at the same time. These bubbles persist a relatively long time and cease to exist when they collide with Joe, a wall, or travel a certain distance away from him. The bubbles individually deal minor damage and can reasonably be avoided either by leaping over them or performing Joe's slide kick, but not by running away from them or standing in place. His secondary attack is his evasive maneuver. Bax will jump backwards at an incredible height while firing two larger bubbles as he retreats diagonally towards the ground. Inverse to the primary attack, this move can be avoided if Joe stays in place or runs away from Bax, since the angle Bax shoots the bubbles is designed to target where Joe will be rather than where he is. These bubbles deal the same amount of damage as the previous move, but larger. His tertiary ability is his melee attack. He will suddenly close the distance on Joe and quickly attack with an energy whip. This move deals twice as much damage as his ranged attacks. His final attack is his seductive taunt. Bax will reconfigure his weapon into a stripper pole and perform a reverse butterfly inversion. The resulting maneuver creates two white hearts that will fly from Bax in an arc in opposite directions. This attack deals minor lust damage and will stun Joe similar to Daku's taunt. He will only use the last two moves if he has already sustained 75% or more damage to his health bar.

A Bax appears alongside a Puca in its dragon form in the Game Over screen for Hiroto Dojo.