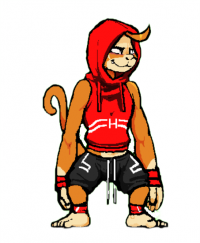 Enemy Number Nine is Signal. Signal is a relatively tall monkey. He appears to be slightly shorter than Joe, although it is hard to tell given his hunched/slouched profile compared to Joe's High Tip-toed Stance. He has tan fur with peach countershading on his hands, feet, abdomen, muzzle, and chest. Most notably, when not wearing his Hoodie he has a patch of countershading shaped like a heart on his chest. Speaking of his Hoodie, He wears a Red Sleeveless Pullover Hoodie with white lines going horizontally around his middle. A lock of hair pokes out from under the top of the hood. Matching sweatbands are worn around his wrists and ankles with white arrow shapes instead of lines. His modesty is protected by black drawstring shorts with white markings that resemble upside-down question marks. Signal is probably the most decently dressed hostile encountered, with his entire torso covered without exposing or accentuating the outline of his genitalia.

Signal also has a white “H” symbol on his Hoodie. The symbol is similar to the one worn on the Stier's Tank Top, implying that they are working together in the Gerrabacco. He is barefoot and both his feet and tail are prehensile; his arms are noticeably long compared to the rest of his body to the point they can touch the ground, although not to the extent that they seem to drag across the floor like the Stier.

Signal is a very confusing enemy due to the way he moves and fights. Signal will jump somewhat high (high enough to jump on top an Isadora Crate) and will seemingly jump closer or farther away from Joe at random, rapidly entering and exiting Joe's Effective Striking Range. Adding to the confusion is the fact that all of Signal's Attacks start with some kind of jumping motion and tend to be as fast as his normal movements. This ironically means that he barely in any way signals or telegraphs his attacks and it makes it hard to differentiate between movements or attacks.

His first attack, is his grapple. The monkey will suddenly leap through the air, pouncing on Joe. The range of this grapple has more Horizontal Distance than the Dakus but less vertical distance.

The second attack used is his seductive taunt. The monkey will perform a one arm handstand with his legs splayed out, he sticks out his tongue while winking and his dick flops out of his shorts. After performing this action, 4 hearts will fly out from the monkey's body in either an “+” or an “x” shaped pattern depending on the Joe's distance and positioning. Like the Stier, this can be considered an Area of Effect type taunt and like the O'Deere, the attack functions as a long range projectile. The hearts can also pass through walls, floors and ceilings, putting Joe at risk of being hit if he is directly above or below Signal on a platform. It deals minor Lust damage.

The third attack is a tail whip. Signal will quickly whirl around whipping his long prehensile tail. The act of doing so creates a crescent-shaped energy shockwave. Signal can spam this attack rapidly, and waves persist and travel very long. This will force Joe to repeatedly time his jumping to avoid the shockwaves as he tries to get within striking range. Additionally, the shockwaves are capable of bouncing off of springs but instead of going straight up the travel at a 120 degree angle. The slap deals minor damage at medium to short range and can stack with the shockwave.

Lastly, he has a slide kick which can be used to reposition himself and deal damage to Joe. He often does this when being chased after jumping back a couple of times or after Joe jumps over his attack enough times. It deals the same amount of damage as the tail whip itself, but his movement is so fast and he travels so far that sometimes it can be hard to figure out where he went.