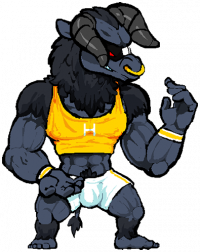 The eighth enemy type you'll deal with, Stier is a large bull humanoid (though in Greek mythology terms, they are referred to as Minotaur) with expansive horns on their head, incredibly long arms which seem to almost drag along the floor when they move, a small, simple tail with a fuzzy tip, and fur tuft that can be found on various segments of their body. Their body is a mix of black and a dark blue, giving them an intimidating feel, but their clothes contrast this greatly, being bright orange and pure white. They wear a tiny tank top that barely fits their body and appears to have a H on the front, sweat bands, and tight shorts. They wear dark shades on their faces, with only their red eyes visible. The fur on their head, while long and flowing at the back and neck, comes together as a mohawk-esque design across the scalp. Finally, they have a golden ring through their nose.

Stier will prove to be tricky enemies for the player. They have the second highest amount of health after the Goliath and the highest amount of resistance to Joe's sexy poses. They have a small leap attack for a grapple which can prove a little difficult to avoid, and have an area of effect lust attack that affects a small radius around them (as oppose to other enemies thus far, who could only perform lust attacks in a single direction). Their 100% Lust-based grapple is extremely powerful; due to how long the animation is, the grapple winds up draining almost half of Joe's base HP.

The Stier's lust attack is telegraphed by the Stier pulling up his shirt while pulling his shorts low enough to show off his genitals while posing dramatically with one of his biceps flexed.

The Stier appears in the Game Over screen for Lood City.

As of Version 0.18.000, Stier now has Poise. Poise allows Stier to absorb a considerable amount of damage from Joe without flinching, allowing them to close the distance on Joe and strike with any of their devastatingly powerful attacks. Joe must instead rely more so on his Butt Stomp ability to break through Stier's Poise or use his teases to seduce Stier from a distance.