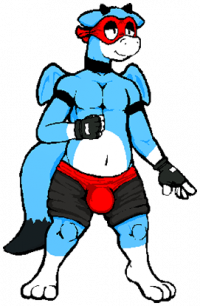 Joe is the main protagonist/player character of Oh So Hero!. He's a sky blue dragon-esque anthro who sports a fox-like tail, apparently likes to walk around in tiptoes, and wears what is described to be in-game as a “hero” costume, which consists of the following: a pair of tight black trunks with a red bikini line, black fingerless gloves, and a simple red superhero-like eye mask. He also has a white abdomen, two small wings growing out of his shoulders, and small, nubby black horns growing out of his skull.

Not a lot is known about him yet beyond the fact he likes playing the hero, has some talent in combat, and is no stranger to engaging in more…intimate fun with others. He seems to have a happy-go-lucky attitude, but is said to show his serious side when he dons his costume.