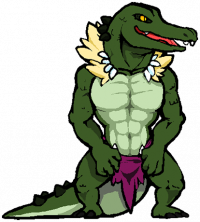 Gatis (GAH-tiss) is the seventh enemy type encountered and is a muscular crocodile (or is it alligator…?), who wears only a loincloth that hides his thick penis, though they're a similar boat as Amaru since it is ambiguous whether said penises are external or internal due to being humanoid in shape yet not forming any obvious bulges as their sizes might suggest.

They can prove to be dangerous enemies if not dealt with immediately; with a good range on both their melee attack (a mid-ranged tail slap) and grapple (a simple chomp), they can prove to be difficult up close, but their biggest danger is their ranged lust attack, which will increase Joe's Lust by 20%, meaning only five of these attacks can leave you open to their 100% Lust-based grapples. The lust attack's range is about the same as Joe's.

The Gatis' lust attack is telegraphed by a crotch grab and a finger crooked into a “come hither” gesture as the reptile licks his lips seductively.

However, while this move is instant, Gatises will pause briefly when you get out of their melee range to perform it and the range it effects is visible on screen (after the update described below anyways), allowing players to avoid it with a bit of effort.

As of Version 0.14.104, the Gatis's Lust attack now has more pronounced visuals.

One Gatis appears in the Game Over screen for the Forbidden Bayou, alongside a O'Deer.

As of Version 0.18.300, Gatis's tease attack instead deals continuous damage over time while within his hitbox rather than a flat 20% lust increase.