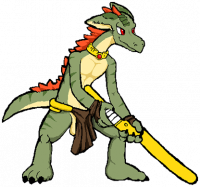 Amaru is a tall, lizard-like alien with smoke green scales, vis vis countershading, and orange mane running along the back of his head, down his spine to the base of his tail. They are the second enemy type you will encounter. They only wear a brown loincloth, with only their nuts being visible, and hold a large sex toy weapon, which they swing like a sword. It appears to be made out of the same material as the Daku's dildo knife, implying that they are working together in The Gerrabacco. They're the first enemies with “hyper”-sized penises (on the lighter side in this case), and it is ambiguous whether said penises are external or internal since they're humanoid in shape yet do not form any obvious bulges as their sizes might suggest.

While tougher than the Daku and with a longer and stronger swing range, they have a shorter ranged grapple and are far fewer in numbers to prove problematic.

As of version 17.000 Amaru finally have a seductive taunt. Amaru will seductively lick the side of their dildo sword which will cause a small heart to appear on the tip of the weapon. The heart will fall on to the ground and begin rolling across the floor at high speeds dealing minor damage to Joe. The hearts will stop if it collides with Joe or any walls, meaning that they can potentially be used from elevated platforms. Additionally, the hearts properly obey the laws of physics; if Amaru fires their heart in one direction while on a platform moving in the same direction the heart's downward vector will be perpendicular with Amaru's movements causing it to appear to fall behind him and completely miss Joe. By contrast if Amaru fires the heart in the opposite direction he is moving, then it will move faster and be easier to hit Joe.