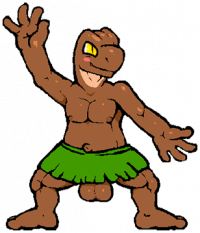 Lono'e (LOH-noh-ay) is a brown, dinosaur-esque creature, and the third enemy type you'll encounter. They wear a simple grass skirt, leaving their testicles somewhat exposed (yet not their humanoid cocks unless they're pulled aside). Their primary method of attack is a stomp, which can be spotted as it's telegraphed briefly by their attack animation.

While they lack the range of previous enemies, they have bigger health pools, can move very quickly on the ground, and perform grapples more often (which are nearly impossible to spot before it's too late). Plus, they appear commonly as you enter the Treewish Forest and Brask's Jungle, so fighting crowds of them is ill-advised.

As of Version 14.500, the Lono'e have a weak lust attack in the form of shaking their asses in front of Joe. Like their other moves, Lono'e will only be able to use it at extremely close range. It comes out very fast, and is generally difficult to avoid, but it can only be fired in one direction.

As of version 14.600, the Lono'e lust attack has received a slight buff: a slightly longer range and multiple hit boxes that last a little after the actual animation ends, plus a minor lust damage increase. It is still fairly weak though.