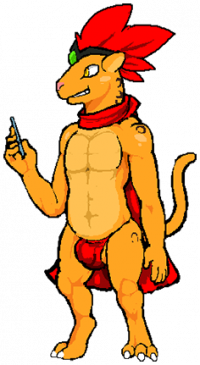 ??? is a secret feline character wearing an Aztec attire. He has golden fur with a few black markings scattered across his body. He wears a spiky feathery headdress with a green gemstone on the front, what seems to be a red thong, and a large red scarf around his neck that drapes down his back like a cape. He appears to be holding a pen or at least something similar. He also has digitigrade feet (a first in the game, though Joe may or may not count since he might just be standing on his tiptoes) and, like many other characters in the game, a simple humanoid penis.

When found, he mentions that the elders won't be pleased he was found but offers an “exchange” for Joe to keep quiet.

Given his appearance, secret nature, and the object he's holding, Leon could possibly be a developer Easter Egg.