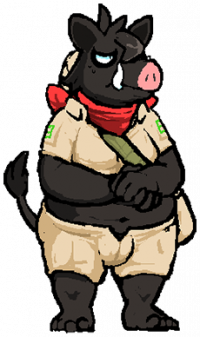 Dan is a black, chubby warthog found in the Bayou Cabin, specifically on the lower floor. While most of his body mainly consists of black fur, his snout is a perfect circle of pink and his ivory tusks protrude further out of his jaw than regular hogs would. His tail slinks off with a puffy tuft of black fur at the tip and his hair flops over his brow, obscuring one of his eyes. He also seems to have dimples or freckles on his cheeks. He flicks his tail when happy, as seen during the climax of his sex scene.

His outfit is somewhat similar to a boy scout's, with a beige pair of shorts and beige shirt, however neither fit properly due to his belly. Green patches can be seen on both shoulders of the shirt and looks like a square 8. A red scarf covers his neck, tied up behind his head, and a bag hangs from his hip with the strap crossing over his body and hooking onto his left shoulder.

He's part of Griff's expedition and acts as their carthorse, carrying all of their items. Dan appears to have a timid nature, and seems to be afraid of upsetting Griff, as seen when he begs Joe not to tell him of his frustrations of having to carry everything. According to Dan, Griff is looking for a hidden tomb nearby.

Beyond his sex scene, Dan has yet to serve another purpose. However, his mention of a hidden tomb may or may not suggest a secret, but it might also refer to Brask's Palace.